Abstract
Untreated adult or elderly cleft lip and palate patients are rarely seen, but studies on delayed primary palatal closure have been performed in the less developed Asian and African countries, where access to medical care is difficult. A 64-year-old woman visited our clinic with untreated cleft palate with a 40×20-mm-wide defect in the medial palate. Two-flap palatoplasty under general anesthesia was performed to close the cleft palate. After 1 month, the result was favorable without any complications including oronasal fistula. Cleft palate primary repair in an elderly patient is rare and has some surgical problems that are associated with a wide range of defects, but good results can be obtained if surgery is performed well with appropriate considerations.
Keywords: Cleft palate, Aged, Surgical procedure

The main purpose of timing of palatal surgery in children is to ensure function suitable for normal language development without significantly interfering with maxillary facial growth. Timing of palate repair may be the most important treatment factor in speech and facial morphology. Though many studies have investigated the appropriate time for surgery, there is no consensus on preferred age or technique for surgery 1 .

However, untreated adult or elderly cleft lip and palate patients are rare. Studies on delayed primary palatal closure have been performed in less-developed Asian and African countries, where access to medical care is difficult 5,6 . Most cleft lip and palate patients in South Korea are diagnosed early, even before birth, and the cleft lips and palates can be corrected through systematic treatment before adulthood. Primary cleft repair for adult patients is different from that performed in infants because adults have completed facial growth.

This article describes a case history of primary repair in an elderly patient with untreated cleft palate and discusses appropriate management of such cases with reference to the results of a literature review.

A 64-year-old woman visited the authors’ clinic due to nasal leakage and an ill-fitting prosthesis. The patient had been born with unilateral cleft lip and palate. She had undergone primary cleft lip repair during infancy and wore a removable partial prosthetic appliance. A 40×20-mm-wide defect in the medial palate caused velopharyngeal insufficiency during speech, and cleft palate speech (including hypernasality) was observed. Growth of the maxilla was well established, and occlusion was stable, with harmonic transverse width. Nasal deformity also was observed. The nasal tip was displaced to the non-affected side and displayed the typical features of secondary nasal deformity in unilateral cleft lip and palate patients.

Interestingly, the patient had undergone augmentation rhinoplasty at a local plastic surgery clinic to improve the appearance of her nose.(Fig. 1) At that time, cleft palate and cleft nose deformity due to cleft sequelae were diagnosed. Two-flap palatoplasty was performed under general anesthesia to close the cleft palate 7 . After the incisions were performed, undermining of the mucoperiosteal flaps was carried out. The muscle was dissected from the posterior edge of the hard palate to create a muscle sling. Due to the large defect in the cleft palate, an additional back-cut incision on the posterior portion of the flap ensured proper primary closure.(Fig. 2) Next, closure of the nasal layer and of the muscles of the soft palate was carried out. Finally, approximation of the oral and nasal layers was performed using mattress sutures on the hard palate. During the operation, the levator veli palatine muscle was repositioned with veloplasty. The stitches were removed one week after surgery. At one month postoperatively, the result was favorable without any complications, including oronasal fistula. Three months after palatoplasty, nasal deformity correction with auricular cartilage graft was performed. The patient has been under observation since then and is currently undergoing prosthetic treatment.(Fig. 3)

Some cleft lip and palate patients do not undergo timely surgery due to lack of knowledge of the importance of early surgery, lack of hospital access, and economic difficulties 5,6 . In 1990, Hoppenreijs 2 conducted a retrospective study of eight untreated adult cleft palate patients. Six of the patients were using prosthetic devices to separate their oral and nasal cavities. If the denture abutment teeth are lost early, retention and stability of the prosthesis are decreased, which leads to speech problems and impaired masticatory ability. These difficulties led to a surgical intervention request. In the case reported herein, the patient was likely not treated early due to economic difficulties as well as lack of knowledge of the importance of early treatment.

Early cleft palate repair increases the possibility of normal speech development 8 . Delayed treatment may interfere less with midfacial growth, but speech development is adversely affected 9 . If palatal closure is delayed and abnormal speech mechanisms have developed, the possibility of normal language development is greatly reduced 9 . Though a cleft palate is corrected, the compensatory pattern often continues after the operation, and its treatment is very difficult 10 . According to Bruneel et al. 5 , delayed palatal repair in patients older than 8 years often is insufficient to resolve nasal airflow errors, resonance abnormalities, and articulation disorders. These authors reported that speech therapy can be helpful after delayed palatoplasty. In the case reported herein, speech deviation (including hypernasality) was observed, and the delayed palatal repair seemed insufficient to eliminate these symptoms.

Operative procedures to perform primary repair of cleft palate may be detrimental to maxillary growth because the palatal repair may cause alveolar collapse and subsequent growth impairment 1,3 . In this case, the patient had undergone only cleft lip repair in childhood, which does not seem to inhibit growth of the maxilla.

Cleft palate speech deviation can be prevented through early surgery, but cleft palate repair during the growing stage can result in maxillary growth restriction, which may require additional orthognathic surgery. Ross documented that, in approximately 25% of adult males with repaired unilateral cleft lip and palate, orthognathic surgery was necessary to achieve adequate functional relationship of the jaws and teeth 4 . In the case herein, the patient did not undergo early cleft palate repair, and balanced growth of the maxilla was observed, which may be considered an advantage of post-growth cleft palate repair.

Cleft palate surgery in adults with completed jaw growth is different from the surgery in children. Delayed hard palate closure has been reported to cause severe language problems and palatal fisula 5,11 . In 2007, Morioka et al. 11 analyzed 550 cases of adult cleft lip and palate patients who had been treated over 11 years. The study results showed that it is possible to perform more aggressive correction (such as open rhinoplasty, bone grafting on the hypoplastic maxilla, and premaxillary recession or wide undermining) in adult patients because maxillary growth does not need to be considered. In adults, however, the nasal cartilage has low elasticity and tends to return to its original position after surgery.

Primary palatoplasty is more difficult in adults than in children because the adult cleft palate is wider, and the transverse palatal surface around the transverse palatine sutures is sharp. In addition, the palatal segments are more vertically displaced due to location of the tongue between the cleft palate for cleft closure 11,12 . As a result, in the study by Ward and James 12 , the incidence of oronasal fistula after palatoplasty was 38%. Morioka et al. 11 reported that complications (oronasal fistula, infection, etc.) occurred in 58% of the patients in his study. In the case herein, enlargement of the cleft palate due to growth of the maxilla was expected to cause difficulty in primary closure of the cleft palate. An additional back-cut incision was performed on the posterior portion after extensive dissection of the mucoperiosteal flap to achieve tension-free primary closure.

Cleft palate primary repair is rare in elderly patients and carries the risk of surgical problems, with a wide range of defects. However, satisfactory results can be obtained if the repair is performed with the aforementioned considerations.

This work was supported by a 2-year research grant of Pusan National University.

The study was waived by the institutional review board of Pusan National University Hospital (IRB No. H-1904-006-078). 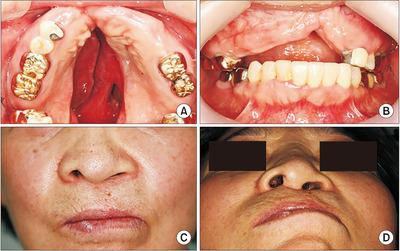 Fig. 1. Clinical features. Cleft nasal deformity due to sequelae of the cleft lip and palate. A, B. Intraoral features. C, D. Extraoral features. A 40×20-mm-wide defect in the medial palate caused velopharyngeal insufficiency during speech; cleft palate speech, including hypernasality, was observed. Interestingly, the patient previously underwent augmentation rhinoplasty by a local plastic surgeon to improve the appearance of her nose.

Fig. 2. Intraoperative features. A. Nasal side closure. B. Palatal side closure. An additional back-cut incision on the posterior region of the flap facilitates primary closure. 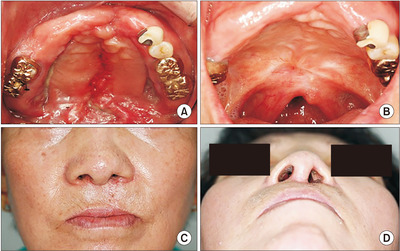 Fig. 3. Postoperative clinical features. A. Intraoral features one month later. B. Intraoral features one year later. C, D. Nasal features after cleft nose deformity correction with auricular cartilage one year postoperative. After one month, the result was favorable without any complications, including oronasal fistula. Three months after palatoplasty, nasal deformity correction with auricular cartilage graft was performed. The patient has been under observation since then and is currently undergoing prosthetic treatment.