Periodontitis is a common chronic inflammatory disease. Reportedly, 796 million people worldwide have severe periodontitis1, and 42% of 30-year-old adults in the United States2 and more than 30% of adults in Korea are reported to suffer from periodontitis3. The loss of teeth due to periodontitis causes the loss of mastication function, leading to a poor quality of life4. In addition, the association of periodontitis with systemic diseases such as cardiovascular diseases and diabetes, as a cause of systemic inflammation due to bacteremia, is also attracting attention5.

Several modalities exist for the diagnosis of periodontitis. The most basic diagnostic process is the evaluation of alveolar bone loss through panoramic or periapical radiography. Subsequently, the dentist screens for redness of the gingival tissue and presence of swelling, edema, and abscesses through an intraoral examination6.

The loss of alveolar bone reflects the progression of periodontitis and does not necessarily indicate the current state of inflammation. In some patients, despite extensive alveolar bone loss, healthy gingiva is observed without severe inflammation after gingival recession. The state of periodontitis can also be verified through probing. A deep periodontal pocket with bleeding on probing (BOP) can be an important indicator of the active state of the existing periodontal lesion. However, the use of anti-thrombotic agents and presence systemic disease may cause a predisposition to bleeding, with smoking affecting the pathological bleeding tendency of periodontal tissues7.

Therefore, there is a need for an objective indicator to determine the present inflammatory state of the periodontal tissue. Advanced glycation end products (AGE) are the end products of nonenzymatic glycation and related to cell degradation, cytokine induction, and inflammatory reactions8. They interact with several cellular receptors, with the receptor for advanced glycation end products (RAGE) being the most representative9. The bond between AGE and RAGE is associated with various systemic inflammatory processes and also the upregulation of TNF-a, IL-6, and IL-1. The upregulation can cause immune dysfunction, cellular stress, cytokine imbalance, and the progression of periodontitis. RAGEs, when detached from the cell membrane, are called the soluble forms of RAGE (sRAGE). sRAGE could be found in the blood and various other body fluids, and they act as a “decoy receptor” for RAGE or “RAGE inhibitors”. In other words, sRAGE can combine with AGE to inhibit the ligand-RAGE interaction between AGE and RAGE10. sRAGE can be a potential objective indicator of the current state of periodontitis. In fact, in various inflammatory diseases, the sRAGE value was classified according to the severity11. The purpose of this study was to investigate the correlation between sRAGE and the periodontitis status described in several classifications of periodontitis and to confirm if it could be used to determine the current inflammatory state of periodontitis.

This retrospective study was performed with the data obtained from 84 patients without any systemic diseases. The 84 participants were recruited from the rheumatology clinic and a section of dentistry at the Seoul National University Bundang Hospital through local advertisements in Bundang and surrounding areas from October 2012 to September 2013. Participants who had undergone periodontal treatment in the past 6 months; were on immunosuppressives, corticosteroids, or antimicrobial therapy which could affect their systemic inflammatory and periodontal conditions, in the past 3 months; or had history of diabetes or inflammatory bowel disease, were excluded. This study was approved by the Institutional Review Board of Seoul National University Bundang Hospital (No. B-1910/570-108).

Clinical demographic data such as age, sex, smoking and drinking history, and body mass index (BMI) were recorded. The patients’ medical history and history of recent medications were investigated. Various parameters that affect dental health including dental visits within the past 12 months and brushing habits were recorded for all participants.

The periodontal status of all remaining teeth in the oral cavity, except the third molars, was examined by determining the scores for plaque index (PI) and BOP index and measuring probing pocket depths (PPD). The BOP index was determined as the number of BOP points divided by total probing points with each tooth having six probing points (mesiobuccal, buccal, distobuccal, mesiolingual, lingual, and distolingual). PI was similarly determined as the number of tooth surfaces with plaque accumulation divided by the total number of tooth surfaces. The PPD and BOP index scores were measured by a single dentist using a University of North Carolina -15 periodontal probe (Hu Friedy, Chicago, IL, USA). The numbers of remaining teeth were also recorded. All the measurements were performed in accordance with a previously described method12-14.

The data obtained from 76 of the 84 participants were statistically analyzed. Data from patients with missing values were excluded. According to the severity of periodontitis, demographic data, data obtained from blood samples and dental examinations, the presence of in GCF, sAGE and sRAGE, and sAGE/sRAGE ratios were analyzed. In each group, continuous variables were compared using the Wilcoxon’s rank-sum test, and categorical variables were analyzed with the chi-square test and Fisher’s exact test.

The correlations among sRAGE, sAGE, periodontal indices, and inflammation-related variables were assessed by Spearman’s rank correlation coefficients. In addition, partial correlation analysis was also performed on variables exhibiting significant changes in correlation coefficients according to the severity of periodontitis. <0.05 was considered statistically significant. Continuous variables were expressed as a median with interquartile range, and categorical variables were presented as a count or percentage. Statistical analysis was performed using the R ver. 3.6.1 (https://www.R-project.org; The R Foundation for Statistical Computing, Vienna, Austria).

The demographic characteristics of the study population are shown in Table 1. ESR, mean PPD, BOP index scores, PI scores, serum antibody level, and presence of in GCF were significantly different among the groups according to the classifications. There were no statistically significant differences in sex, BMI, CRP level, smoking and drinking history, dental clinic visits in the past 12 months, tooth brushing habits, and number of remaining teeth.

As a result of the partial correlation analysis, which controlled other variables that may affect the sRAGE or BOP index, a stronger negative correlation was found between sRAGE and the BOP index. In each classification, the values of the correlation coefficient were –0.36, –0.55, and –0.45 (PPD≥5 mm group, severe group of AAP/CDC, periodontitis group of López, respectively) in cases with severe periodontitis or exhibiting the presence of periodontitis. Conversely, the ratio of sAGE/sRAGE showed a strong positive

Most studies on sRAGE involved animal or cell experiments, and few studies have attempted to identify the trends in humans. Although the results of this study were not statistically significant, we observed the tendency for low sRAGE levels in patients with periodontitis. This result is similar to that of a previous study19 which analyzed the sRAGE levels in periodontitis patients. Several studies have shown that considering the roles of the AGE-RAGE axis and sRAGE20, it is difficult to predict the state of a disease simply by sRAGE or AGE alone. Initially, sRAGE competes with RAGE and acts as a false receptor for AGE. Therefore, in cases with low serum sRAGE levels, some AGE persists and binds to RAGE. However, in cases with high serum sRAGE levels, lesser amounts of AGE persist, preventing disease development. From this point of view, the values of the sAGE/sRAGE ratio, which represents the relative AGE and sRAGE amounts, were compared according to the severity of periodontitis, but no significant results were obtained. The limitation of this study is that the total sample size was small and the number of patients were not matched for each group thereby causing statistically insignificant results.

In the case of correlation analysis among sAGE, sRAGE, sAGE/sRAGE ratio, and indices frequently used as a diagnostic standard for periodontitis, the correlation coefficients were low. However, when the analysis was centered on the correlation between the BOP index, which can indicate the current inflammatory state of the periodontal tissue, and sRAGE, a stronger correlation was found. In a periodontal pocket caused by the loss of alveolar bone, there is increased colonization of anaerobic bacteria and activation of the inflammatory reaction around the periodontal tissue, thereby causing bleeding during probing. In the PPD≥5 mm, AAP/CDC, and López classifications, it was confirmed that the BOP index was significantly higher for more severe disease, and the weak negative correlation between BOP index and sRAGE gradually changed (ρ=–0.20 → –0.23 or –0.50 or –0.40). This indicates that sRAGE can explain the current state of periodontitis. In particular, a stronger negative correlation in the partial correlation coefficient controlling variables indicative of other inflammation or variables that may affect sRAGE supports this result. Additionally, the results of the partial correlation coefficient analysis found that the sAGE/sRAGE ratio and BOP index exhibited a stronger positive correlation than before in the group with severe periodontal disease. This seems to be related to the results of previous studies in which the sAGE/sRAGE ratio was high in the group with severe periodontal disease20.

In this paper, we did not have a sufficient number of subjects, and there was a limitation in statistical analysis due to the difference in the ratio of subjects with periodontal disease and subjects without periodontal disease. In addition, it was a healthy patient group and it was confirmed that there were no diabetes or inflammatory bowel disease that could affect sRAGE or sAGE. However, other inflammatory diseases or factors that may contribute to temporary inflammatory conditions were not verified.

The correlation coefficient between sRAGE and BOP index, which indicates the current inflammatory state of periodontitis, demonstrates a direction consistent with the pathological causal relationship. sRAGE is expected to help determine the current status of periodontitis and its severity. Additional studies with large sample sizes are necessary.

This study was selected in the 3rd Clinical Research Methodology Workshop 2014 of Seoul National University Bundang Hospital (SNUBH) and was supported by a grant from the SNUBH Research Fund (No. 02-2017-039).

The authors are accountable for all aspects of the work in ensuring that questions related to the accuracy or integrity of any part of the work are appropriately investigated and resolved. The study was conducted in accordance with the Declaration of Helsinki (as revised in 2013) and approved by the Institutional Review Board of Seoul National University Bundang Hospital (No. B-1910/570-108) and individual consents for this retrospective analysis were waived. 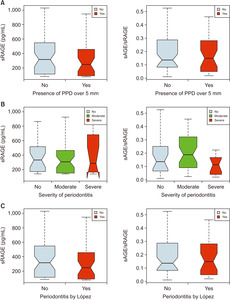 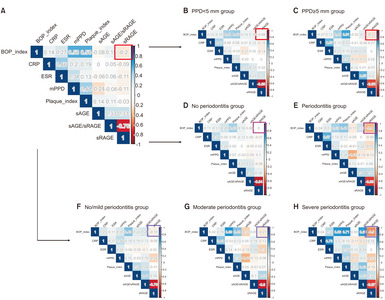