Abstract
Objectives: Mandibular fractures vary significantly with respect to epidemiological and demographic parameters among populations. To date, no study has evaluated these aspects of mandibular fractures in Nuh, Mewat, Haryana, India. To retrospectively analyze the incidence, age and sex distributions, etiology, anatomic distribution, occlusal status, treatment modality provided, and their correlation in patients who suffered isolated mandibular fractures.
Materials and Methods: The records of maxillofacial injury patients who reported to the Department of Dentistry, SHKM Government Medical College from January 2013 to December 2019, were retrieved from our database, and necessary information was collected. The data collected were analyzed statistically using IBM SPSS ver. 21.
Results: Totals of 146 patients and 211 fractures were analyzed. There were 127 males and 19 females with an age range of 3-70 years (mean age, 26 years). Road traffic accident (RTA) was the most common cause of fracture (64.4%), followed by fall (19.9%), assault (15.1%), and sports injury (0.7%). Of all patients, 42.5% had bilateral fractures, 31.5% had left side fracture, 21.2% had right side fracture, 3.4% sustained midline symphyseal fracture, and 1.4% had symphyseal fracture along one side of the mandible. Site distribution was as follows: parasymphysis (34.6%), angle (23.7%), condyle (20.4%), body (12.8%), symphysis (4.3%), ramus 2.4%, and dentoalveolar 1.9%. The most common facture combination was angle with parasymphysis (17.8%). Occlusion was disrupted in 69.2% patients. Closed reduction was the predominant treatment modality.
Conclusion: The data obtained from retrospective analyses of maxillofacial trauma increase the understanding of variables and their outcomes among populations. The results of the present study are comparable to those of the literature in some aspects and different in others.
Keywords: Mandibular fractures, Mewat India, Etiology, Retrospective study, Incidence

The mouth is the gateway to the body. Trauma to this region affects the airway, food intake, speech, facial aesthetics, and overall psychosocial well-being of patients. Mandibular fractures comprise 15.5%-59% of all maxillofacial fractures1. The mandible is the second most often fractured adult facial bone because of its projecting and vulnerable position in the face2.

Various countries across the globe have provided statistics for mandibular fractures, and the information provided is unique to the countries of origin and their residents. Several variables are related to the study of mandibular fractures due to differences in demographic characteristics reported in the literature3. Socio-economic trends, geographic locations, and local behavior have a considerable impact on the etiology of the injury, which sequentially influences the distribution of fracture sites4. No unanimity has been found for the common pattern of mandibular fractures because of disparate associated factors such as geographic area, population mass, socio-economic status, regional government, status of the population studied, and political era5.

It is a paradox that, despite being adjacent to the information technology hub Gurugram and industrial hub Faridabad, Mewat (now renamed as Nuh) is the most underdeveloped district of not only Haryana state, but of all India. This region lies in the semi-arid zone and is inhabited primarily by Meo Muslims. According to the 2011 census, it has an estimated population of 10.89 lacs (1 lac=100,000) and an area of 1,507 km2. A majority of the population (88%) resides in rural areas and is engaged in agriculture. Scarcity of water limits the industries in this region. This area lags significantly in various socio-economic parameters such as standard of living, education, health, sex, agriculture, livestock, and economy. The literacy rate is 69.94% among males and decreases to 37.6% in females. The available health data indicate a lack of good health care facilities6. Before establishment of the medical college, there were limited health care facilities for management of facial trauma. SHKM Government Medical College, located in the Nalhar village of Nuh, was established in 2012, and is the only tertiary care health facility there. The institution caters to various blocks of Mewat and adjoining areas, namely, Firozpur Zirka, Taoru and Punhana, as well as adjoining districts of Haryana, Rajasthan, and Uttar Pradesh.

The records of maxillofacial injury patients who reported to the Department of Dentistry, SHKM Government Medical College, from January 2013 to December 2019, were retrieved from the participating institution’s database. A retrospective analysis was conducted on the records of patients having isolated mandibular fractures. The data collected included age, sex, address, etiology of trauma, anatomic location, side of fracture, occlusion status, and treatment provided. Patients with associated maxillofacial fractures and/or comminuted mandibular fractures and patients whose records were incomplete or missing were excluded from the study. The data collected were analyzed statistically using IBM SPSS Statistics software (ver. 21.0; IBM, Armonk, NY, USA).

The basis of evolution in management strategies can be attributed to a better understanding of the biomechanics of the mandible, its behavior in response to traumatic forces, fracture patterns, etiology, epidemiology, mode of healing, and functional rehabilitation18.

The mandible has varying strengths of bone in different regions, in correlation with stress distribution on function. It is a tubular V-shaped bone that articulates with the skull via paired temporomandibular joints19.

Mandibular fractures constitute a significant percentage of maxillofacial fractures1. In most studies, males are affected more commonly than females2,5,20. In an extensive study by Ellis et al.21, who analyzed over 3,400 mandibular fractures within 10 years between 1974-1983, there was a clear male preponderance.

This might be due to greater participation in outdoor activities and higher levels of physical activity in males. Furthermore, males are more likely to be involved in traffic accidents and altercations22,23. Other reasons behind this sex pattern could be higher social activity, drug abuse, vehicular driving, industrial work, and sports issues among males24,25. In the present study males also outnumbered females at a ratio of 7:1. The sex ratio observed in other studies was 3:118, 4:126,27, and 6.6:128. Mandibular fractures have been reported in all age groups (ranging from small children22 to individuals of 95 years29). In the present study, the range was from three to 70 years with an mean of 26 years; the mean age reported in other studies was 39.5 years26, 31.5 years18, and 32.1 years27.

A majority of patients belonged to age group-III (41.1%) in the present study, similar to the 21- to 30-year-old group reported in other studies21,26,28. The incidence of fractures increased from age group-I to -III and then decreased from age group-III to -VI. Thus, the incidence of mandibular fracture is lowest at both age extremes in the present study, which is similar to other studies26. Among young persons, less frequent fracture likely is due to the percentage of time spent indoors and the elastic nature of young bone2. Among individuals older than 60 years, comparatively less exposure to the outside world and a less active life can explain the lower incidence of mandibular fractures20.

In a study by Shah et al.26, the peak age group for mandibular fractures was 21-30 years in both males and females. In the present study, group-III was the peak age group in makes, while females age groups-III, IV, and V were affected equally.

There is a striking contrast in the etiology of mandibular fractures in developed and developing countries. The most common causative factor in developing countries is RTAs3,22,23,30. This might be due to rash driving, speeding, subpar roads, unwillingness to follow road safety measures such as wearing of helmets or seatbelts, inadequate implementation of traffic rules, drunken driving, increased use of vehicles by minors, poor maintenance of vehicles, etc3,20,22,23.

In the present study, the most common cause of mandibular fractures was RTAs (94/146, 64.4%), followed by fall (29/146, 19.9%), assault (22/146, 15.1%), and sports (1/146, 0.7%). This finding is consistent with previous studies26,31-33. In India, the increasing incidence of alcohol dependence and drunken driving is the reason behind the increased incidence of fracture due to RTAs. Giri et al.34 noted that the high prevalence of intoxication among the affected population points to the growing necessity of reliably documented and scientifically backed evidence of road traffic legislation, with compulsory use of seat belts and safety helmet regulations.

The only case of a sports injury was reported in age group-I, the first decade of life. Fall was the most common cause of mandibular fracture (75%) among the elderly (group-VI), likely because of medical conditions, poor muscular control and bodily response, and lack of support and care. Moreover, in geriatric patients, bones become more brittle and have a susceptibility to injury even after a minor fall35.

In the current study, the most common fracture site was the parasymphysis (73/211, 34.6%). This finding is similar to previous studies. This could be explained by the horseshoe shape of the mandible, resulting in fractures of the parasymphysis under forces due to the large canine roots and convex structure18,20,29,32,36. In this study, the second most common unilateral fracture site was angle (50/211, 23.7%), followed by condyle (43/211, 20.4%).

In most studies, the coronoid process of the mandible is the least affected site of mandibular fracture20,26,41. This is true for the present study, with no reported case of coronoid fracture.

Specific association between fracture locations is an important consideration when performing clinical assessment of a patient with a mandible fracture. Knowledge that one particular type of fracture is more likely with a fracture at another location can aid in diagnosis39. In the present study, the second most common combination was parasymphysis with condyle (16/146, 11.0%).

The left side was involved more commonly than the right, at a ratio of 1.4:1. This was true for males and females. Among assault patients, the left side of the mandible was affected more commonly, as most of the Indian population is right-handed18. According to McManus43, Professor of Psychology at University College London, approximately 90% of humans are right-handed, explaining why the left side of the face is the most common location of injury.

The Ivy eyelet method of intermaxillary fixation was used in patients with no or minimal displacement of fractured segments. In cases needing elastic traction to reduce displaced fracture segments, the Erich arch bar was used. Bridle wiring was performed in pediatric trauma patients. The mean period of intermaxillary fixation was four to six weeks. However, in delayed union, intermaxillary fixation was continued for up to eight weeks. The advantages of closed reduction include reduced morbidity as it does not traumatize the vascular envelope, lower expense, less invasiveness, need for less surgical experience, and can be carried out under local anesthesia with minimal equipment. The disadvantages include a significant period of immobilization and required prolonged closure of the oral cavity, to which the patient might not agree, and it requires intact dentition, maintenance of oral hygiene, and patient compliance. It cannot be utilized in certain situations such as underlying medical conditions and difficult occlusion. Moreover, once the intermaxillary fixation has been released, patients have difficulty in achieving full mouth opening for a few weeks, for which exercises and hot water fomentation are advised. Closed reduction was the preferred method in this study because of the location as a general dentistry department with limited faculty for advanced maxillofacial procedures and limited availability of general anesthesia. This indicates the need for a separate oral and maxillofacial surgical unit in each medical college. Moreover, most of the patients visiting the participating institute experienced financial limitations and preferred less expensive methods of treatment.

Knowledge gained from the study of demographic and epidemiological factors of mandibular trauma will be helpful in the formation of clinical and research priorities for proper treatment and prevention of such injuries. Demographic evaluation of preventive measures helps reduce the incidence of trauma. Medical colleges in India, are tertiary health care centers and handle trauma cases in their emergency departments. Medical colleges in India have a provision only for a general department of dentistry, and there is no guideline for a separate oral and maxillofacial unit. The authors strongly recommend provision for a separate oral and maxillofacial surgical unit in each medical college.

The study was approved by the Independent Ethics Committee (IEC) of SHKM Government Medical College (No. SHKM/IEC/2020/94). The study was a retrospective review and the informed consent was waived by the IEC. 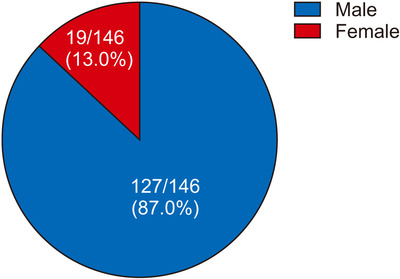 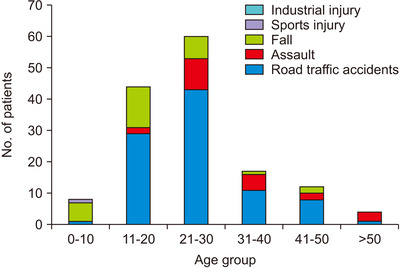 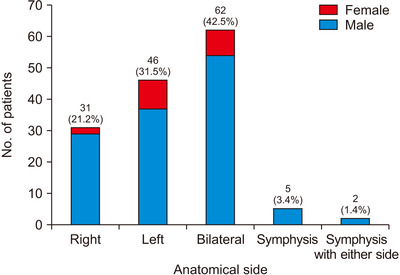 Fig. 3. Sex and anatomical side distribution of mandibular fractures (n=146). 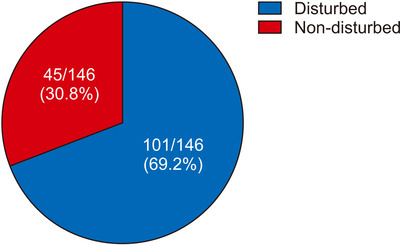 Relationship between etiology and sex