Abstract
Williams–Beuren syndrome (WS) is a rare genetic disorder that results from microdeletion at chromosome 7, which harbors the elastin gene. Clinical findings include arteriopathy, aortic stenosis, hypertension, and laxities and contractures in different joints throughout the body. While many components of the temporomandibular joint (TMJ) normally contain elastin, there are few reports on TMJ manifestations of WS. This study reports a TMJ ankylosis case in a WS patient and shares insight on a possible link between development of TMJ ankylosis and elastin deficiency in WS patients. A WS patient presented with bilateral TMJ ankylosis and was successfully treated with TMJ gap arthroplasty. Hypermobility of TMJ and lack of elastin in retrodiscal tissue can induce anterior disc displacement without reduction. Due to lack of elastin, which has a significant role in the compensatory and reparatory mechanism of TMJ, WS patients might be prone to TMJ ankylosis.
Keywords: Williams-Beuren syndrome, Elastin, Temporomandibular joint, Ankylosis, Arthroplasty

Williams syndrome (WS), also known as Williams–Beuren syndrome, is a rare genetic disorder that affects about 1 in 7,500 to 20,000 births1. The name comes from Drs. JCP Williams and Alois Beuren who independently published studies regarding the disorder in 1961 and 1962, respectively2. WS results from a 1.5 to 1.8 Mb heterozygous microdeletion at chromosome 7, which harbors the elastin gene (ELN). Typical findings of a WS patient include a long face and neck accentuated by sloping shoulders resulting in a gaunt appearance. Most individuals have some degree of intellectual disability that is usually mild. The most common and clinically significant findings are cardiovascular abnormalities including elastin arteriopathy, peripheral pulmonary stenosis, supravalvar aortic stenosis, and hypertension. Endocrine abnormalities include idiopathic hypercalcemia, hypothyroidism, and early puberty. Also, both laxities and contractures are found in joints throughout the body, resulting in postural and gait disturbances. Involvement of the vocal cords, which normally contain an abundance of elastin, results in hoarseness of voice.

While the effects of elastin deficiency in WS patients are generally well recognized, there are few reports on temporomandibular joint (TMJ) manifestations. Many components of TMJ, especially the retrodiscal tissue (RDT), normally contain elastin3. Elastin is also known to be involved in the compensatory and reparatory mechanisms of TMJ4.

A 26-year-old female visited Department of Oral and Maxillofacial Surgery at Seoul National University Dental Hospital on August 3, 2017, with a chief complaint of progressive reduction in maximal mouth opening (MMO) that began approximately two years prior to the visit. She was underweight at 30 kg (66 lbs) and height of 151 cm (4’11’’). The patient was diagnosed with WS through FISH (fluorescence hybridization) assay.(Fig. 1. A) Other medical history included bilateral knee joint synovitis that required surgical intervention, mitral valve prolapse with regurgitation, patent ductus arteriosus, and mild mental retardation with intelligence quotient of 51.

Assessment of head and neck features revealed typical findings of WS including micrognathia, short nose, long philtrum, thick lips, and long face and neck with slanting shoulders.(Fig. 1. B) At the initial visit, MMO measured 11 mm.(Fig. 1. C) Panoramic radiograph revealed oligodontia and multiple caries. Computed tomography of the TMJ showed ankylosis of both mandibular condyles with a radiolucent junction between the glenoid fossa and condylar head, indicating possible fibrous union.(Fig. 2) With clinical diagnosis of fibrotic ankylosis of both TMJs, bilateral gap arthroplasty was planned.

Under general anesthesia via nasotracheal intubation, bilateral TMJ gap arthroplasty was performed. Intraoperative findings included fibrous union of both TMJs that caused hard-end feel upon forced maximal opening. Upon removal of the ankylosed portions of the condyles, intraoperative MMO immediately improved to 40 mm.(Fig. 1. D) Specimens from resected ankylosed tissue were sent for biopsy, but no significant pathological findings were noted aside from mixed osseus and fibrous tissue of typical TMJ ankylosis.(Fig. 1. E) The patient recovered from the surgery without notable complications. Unforced MMO at two weeks postoperative was 27 mm. Postoperative panoramic radiograph showed a gap between the glenoid fossa and the reduced condylar head.(Fig. 3)

Genetic mutation that causes WS most commonly involves ELN, which is responsible for elastin production. Elastin deficiency-related findings of WS patients include cardiovascular anomalies such as supravalvar aortic stenosis, peripheral pulmonic stenosis, and other connective tissue abnormalities such as hoarse voice from vocal cord malformation, inguinal and umbilical hernia, rectal prolapse, and joint laxity or contractures.

Elastin fibers are normally found in TMJ components. Keith5 observed elastin fibers in the disc, articular surfaces of the condyle and glenoid fossa, and posterior band in a bovine study. Gross et al.6 confirmed the presence of elastin in the bilaminar zone of the posterior band of the human TMJ inflicted with anterior disc displacement, which is the most common form of human TMJ derangement. On a similar note, de Bont et al.7 reported the presence of elastin fibers in osteoarthritic TMJs. Recently, Coombs et al.3, with the help of second-harmonic generation microscopy, observed elastin in the RDT. In a comparative study between normal and diseased TMJ, Leonardi et al.4 postulated that oxytalan, elastin, and elauinin fibers function in a compensatory and reparative mechanism in damaged disc tissue. Previous reports on musculoskeletal manifestations of WS deal with posture, gait, and increased or decreased range of motion of upper and lower limb joints. TMJ symptoms are rare in reports and reviews on WS.

Knowing the potential detrimental effect of the lack of elastin on the compensatory and reparative mechanism of TMJ, preventive measures for TMJ disorder might be appropriate for WS patients with early signs of disorders or physiological hypermobility of the TMJ. Also, WS patients tend to be sociable and verbal in nature, making them prone to TMJ overuse. Preventive measures such as limitation of excessive mouth opening and regular TMJ exam with close observation for any change in MMO can allow early intervention of temporomandibular disorder before development of ankylosis. Also, further research into the mechanism of TMJ ankylosis in WS patients is warranted for more effective preventative measures. 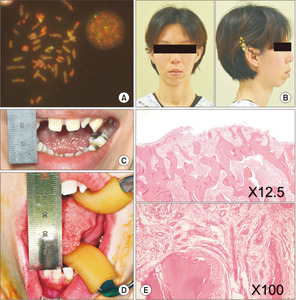 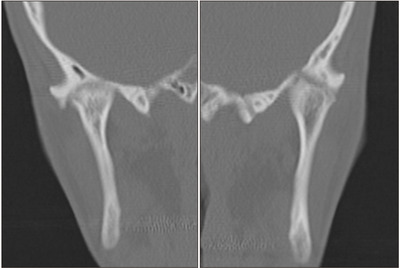 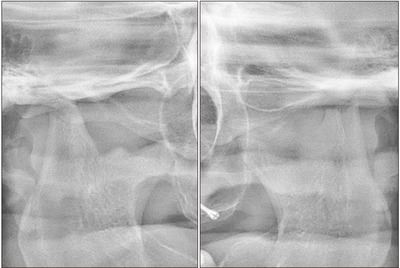 Fig. 3. Postoperative panoramic radiograph showing a gap between the glenoid fossa and the reduced condylar head on both sides.