Abstract
Hepatocellular carcinoma (HCC) is a common, primary malignant liver disease that usually metastasizes to the lungs, followed by the abdominal lymph nodes and brain. However, extrahepatic metastasis to the maxillofacial area is uncommon and predominates in the mandible, so HCCs in the maxilla or temporal bone from a primary hepatic lesion are extremely rare. We present a case of HCC in the maxilla and temporal bone in a 52-year-old male, which was first suspected to be a squamous cell carcinoma after computed tomography but was confirmed as a metastasis related to his primary HCC after fine-needle aspiration biopsy followed by immunohistochemical analysis.
Keywords: Hepatocellular carcinoma, Metastasis, Maxilla, Temporal bone

Hepatocellular carcinoma (HCC) is a common liver malignancy, the sixth most frequently diagnosed cancer, and the second leading cause of cancer death worldwide1,2. HCC frequently metastasizes to the lungs (55%), followed by the abdominal lymph nodes (41%), bones (28%), and brain2-4. However, metastasis to the maxillofacial area is rare; when it occurs, HCC usually affects the mandible instead of the maxilla or temporal region5. These metastatic neoplasms do not have special pathognomonic distinctions in the clinical or radiographical findings6. Therefore, it can be a challenge for clinicians to make a differential diagnosis in malignant tumors of the maxillofacial region. Despite the rare incidence of this type of metastatic tumor in the head and neck region, it remains vital to consider the occurrence of both primary and secondary metastatic malignancies and also to use fine-needle aspiration biopsy (FNAB) followed by immunohistochemical analysis.

This article presents an extremely rare case of metastatic HCC that involved the maxilla and temporal region and was properly diagnosed using immunohistochemical markers.

A 52-year-old male with a previous medical history of alcohol abuse was referred by the Division of Gastroenterology to the Department of Dentistry for an evaluation of left facial swelling. The firm swelling around the left zygoma had begun two to three weeks prior to the patient’s first visit and was accompanied by a slight toothache without tenderness. The patient had had a transcatheter arterial chemoembolization (TACE) procedure several months before his presentation and a percutaneous ethanol injection therapy (PEIT) one month ago to treat his primary HCC and was receiving regular follow-up for chronic hepatitis B, liver cirrhosis with splenomegaly, and residual HCC in segment (S) 7.

A few days later, FNAB with an approach from the facial lesion was performed for further diagnosis. This procedure showed atypical clusters of cells, which turned out to be hepatocytes owing to their sinusoid-like thin blood vessels with abundant cytoplasm, characteristic findings of liver cells. The washed-out cell block also showed atypical cell clusters. These tumor cells had abundant eosinophilic cytoplasm and prominent nucleoli as well as noted sinusoid-like vessels upon hematoxylin and eosin staining. Immunohistochemistry revealed positive staining for human hepatocyte paraffin (HepPar1) antibody, while glutamine synthetase revealed that these tumor cells were hepatocytes. However, negative staining for p63 (which is nonreactive in HCC) in addition to positive staining in a sinusoidal pattern for the CD34 antibody (which is positive for HCC but negative for sinusoids in a non-neoplastic liver) were noted. These findings were consistent with metastatic HCC.(Fig. 4)

The patient was transferred to the Division of Gastroenterology for further evaluation and treatment. Abdominal CT revealed increased sizes of the HCC lesions in S7 and intrahepatic metastases in S2, S3, and S7 in both the right and left lobes of the liver (Fig. 5) but no other definite metastases except in the maxilla and temporal bone according to the bone scan and chest X-ray. For palliative therapy, the Department of Radiation Oncology scheduled 200 cGy of radiation treatment of the facial lesion five times per week for three weeks. However, there was little change in the size of the facial lesion. Additional TACE and PEIT procedures were performed at the primary hepatic lesion. Despite this treatment, the patient’s multiple HCCs grew larger in both hepatic lobes, replacing nearly the whole liver. Enlarged abdominal lymph nodes were noted, and the metastatic mass involving the cheek and zygoma had enlarged to the left orbit and nasal cavity nine months after the additional procedures. The patient expired within a year.

Only 1% of oral cancers metastasize from the primary lesion outside the head and neck area7. Of the primary tumor types that do metastasize to the facial area, those of the thyroid, lung, and kidney are the most frequent4. However, while HCC is one of the most common malignancies to arise in the liver, it rarely spreads to the facial area but instead is often found in the lungs (34%-70%) and lymph nodes (16%-45%). The prognosis of HCC is poor, with an overall five-year survival rate of 20%. The common staging system of HCC used to determine treatment options and prognoses classifies patients based on their tumor stage, performance status, liver function, and cancer-related symptoms8. The present patient presented with advanced-stage HCC and distant metastases.

Metastatic HCC has a male predilection (especially in patients over the age of 60 years) that resembles the characteristics of primary HCC2,9,10. Although its distant metastasis to the orofacial region is uncommon, the mandible or the gingiva of the mandible is the most frequent target; most mandibular lesions are located in the posterior mandible8,9,11-13. In 1998, Chin et al.14 published a review of metastatic HCC in the oral cavity. Most patients were male (46:4 male-to-female ratio); 90% of the patients were older than 50 years of age, and most cases involved the mandible (40 cases in the mandible, 8 cases in the maxilla, 1 case in the tonsil, and 1 case in both the mandible and maxilla). In addition, zygomatic bone involvement of metastatic HCC has rarely been presented. Only four cases were reported in one review2 from 2019. In another study, only 13 out of 77 cases were reported as metastatic HCCs in the maxillary and zygomatic region, with just 2 cases invading the zygomatic bone15. The prognosis for patients with oral metastatic HCC is very poor even after surgical treatment, radiation therapy, chemotherapy using sorafenib, or TACE/PEIT of the primary lesion, with a mean survival rate of 21 weeks and a one-year survival rate of just 15% after diagnosis2,16,17.

Immunohistochemistry is a useful method for the diagnosis of HCC because antigens for hepatocytes are considered useful markers. Glypican-3, HepPar-1, and CD34 are the immunohistochemical markers traditionally used to confirm HCC2,18. In the present case, a malignant lesion in the maxilla and temporal bone was confirmed as a rare case of metastatic HCC from a primary hepatic lesion based on the differential diagnosis made using CT and FNAB along with immunohistochemistry. In the head and neck region, other metastatic tumors from the breast, kidney, and adrenal glands may bear histopathological resemblance to the liver-like pattern of HCC19. Furthermore, metastases from HCC to the attached gingiva can imitate pyogenic granuloma or hyperplastic lesions clinically, which could lead to misdiagnosis13,16. Therefore, immunohistochemistry might be very useful in these cases3,13,19. Severe postoperative hemorrhage during or after incisional biopsy has been reported due to the vascularity of this lesion, so it is recommended that only FNAB should be attempted as a surgical diagnostic procedure when HCC is strongly suspected17.

Surgical resection was not planned in the present case because the patient was in the advanced stage of HCC, which means that metastasis was widespread in the liver, and the surgical risk was high. Treatment for HCC metastasis is typically palliative, and radiation therapy has been shown to be effective palliation for bony metastasis in patients with HCC17. In addition, targeted drugs for advanced HCC are also the standard treatment; sorafenib and apatinib are commonly used antiangiogenic agents, although the former has shown a lower response2.

In conclusion, maxillary and zygomatic bone metastases from HCC are rare, and they present a challenge for clinicians. To ensure prompt management, the differential diagnosis should be made while considering other primary or secondary malignancies. Clinicians should suspect metastatic HCC when they encounter a malignant lesion in the head and neck area, especially in patients with high-risk factors like hepatitis B viral infection, alcohol abuse, a history of HCC, and liver cirrhosis.

The data collection and manuscript writing were done by J.C. 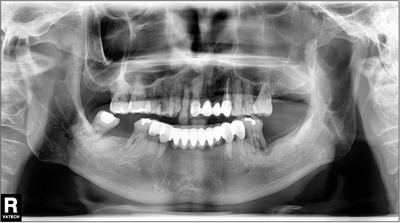 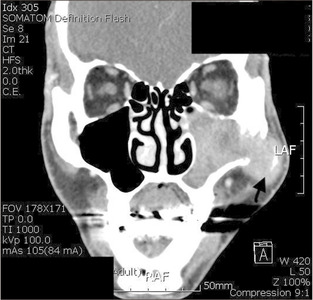 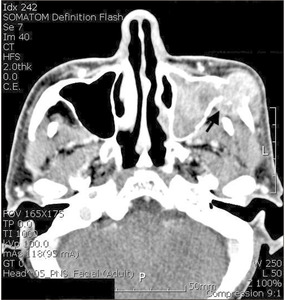 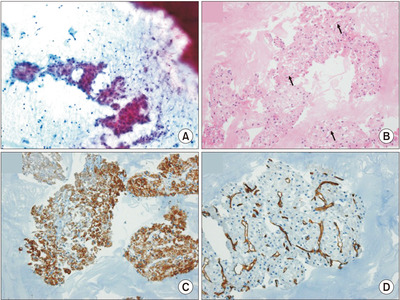 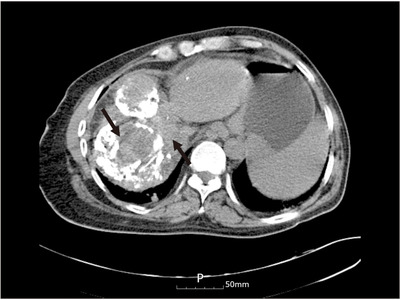