Abstract
Objectives: This study sought to evaluate the efficacy of injecting botulinum toxin into the masseter and temporal muscles in patients with temporomandibular myofascial pain and sleep bruxism.
Materials and Methods: The study was conducted based on a clinical record review of 44 patients (36 females and eight males; mean age, 35.70±12.66 years). Patients who underwent the injection of botulinum toxin into the masseter and temporal muscles for the management of temporomandibular myofascial pain and sleep bruxism were included in the study. Patients were diagnosed based on the Diagnostic Criteria for Temporomandibular Disorders. Sleep bruxism was diagnosed according to the criteria defined by the American Academy of Sleep Medicine. The values of the visual analogue scale (VAS) and range of jaw motion, including unassisted maximum mouth opening (MMO), protrusion, and right and left laterotrusion, were observed preoperatively and postoperatively at one-, three-, and six-month follow-up visits.
Results: MMO, movements of the right and the left laterotrusion, and protrusion increased significantly (P<0.05), while VAS ratings decreased significantly at the three follow-up points relative to baseline values (P<0.05).
Conclusion: Botulinum toxin is an effective treatment for patients with temporomandibular myofascial pain and sleep bruxism.
Keywords: Temporomandibular joint disorders, Sleep bruxism, Botulinum toxin

Temporomandibular disorders (TMDs) are conditions that affect the temporomandibular joint (TMJ), the chewing muscles, and the other associated structures1. Their symptoms include pain in the head, face, neck, and ear; sounds in the TMJ; and restricted jaw movements2. TMDs are estimated to affect more than 5% of the population3. The etiology of TMDs is multifactorial, with the most common factors being predisposing factors (e.g., systemic, psychological, structural, and genetic factors), initiating factors (e.g., trauma and parafunctional habits), and perpetuating factors (e.g., mechanical, muscular stress, and metabolic problems)4.

Sleep bruxism (SB) is defined as masticatory muscle activity occurring during sleep that is rhythmic (phasic) or nonrhythmic (tonic) and not a movement disorder or a sleep disorder in healthy individuals13. SB is a common condition in the general adult population with an estimated prevalence of 5.5% to 12.8%14,15. It can cause various symptoms, such as tooth wear and pain, or malfunction of the chewing system16.

Bruxism is most commonly diagnosed using the criteria defined by the American Academy of Sleep Medicine (AASM)17, which were last revised in 2014. Accordingly, a patient must meet several criteria to be diagnosed with SB; these include (1) regular or frequent tooth grinding sounds during sleep and (2) one or more of the following clinical signs: (i) abnormal tooth wear or (ii) transient morning jaw muscle pain or fatigue, and/or temporal headache, and/or jaw locking on awakening consistent with reports of tooth grinding during sleep.

TMD treatment aims to relieve pain and restore normal temporomandibular functions18. Since the pathogenesis of TMDs is not clearly defined, physicians generally prefer noninvasive, reversible, and conservative treatment options and tend to resort to surgery only when conservative treatments are inadequate19. The traditional treatment approach for TMDs includes physiotherapy and exercise, anti-inflammatory and analgesic drugs, muscle relaxants, oral splints, or a combination of these treatments. Recent studies have reported botulinum toxin (BTX) injections, which has become an increasingly common treatment approach, to be an effective treatment option for relieving pain and sensitivity in TMDs20,21. However, there is currently no definite protocol regarding BTX use in the context of TMDs nor is there a consensus on the effects of BTX in patients with TMDs22. The present study sought to evaluate the effect of BTX injection on the pain level and mouth opening capacity when applied to the masseter and temporal muscles of patients with temporomandibular myofascial pain and SB.

This study was approved by the Clinical Research Ethics Committee of Kocaeli University (KÜ GOKAEK 2019/148) and was conducted by way of a clinical records review of 44 patients with temporomandibular myofascial pain and SB admitted to the Department of Oral and Maxillofacial Surgery at Kocaeli University between January 2017 and December 2019.

A total of 44 subjects (36 females and eight males) aged between 18 and 73 years were enrolled. Patients who underwent BTX injection into the masseter and temporal muscles were included and subjects in our study were diagnosed using the Diagnostic Criteria for Temporomandibular Disorders23, while SB was diagnosed according to the criteria defined by the AASM17. Patient data were obtained via self-reporting and clinical data were recorded.

Patients having 1) resistance to previous conservative treatments (e.g., briefing about the disorder, soft diet, limitations of mouth opening, usage of systemic nonsteroidal anti-inflammatory drugs, and stabilization splint treatment); 2) moderate or severe pain in the masseter and temporal muscle examinations; 3) a diagnosis of SB according to the AASM; and 4) an age of older than 18 years were included.

Patients with 1) the presence of a known connective tissue or autoimmune disease and neuromuscular disease; 2) the concurrent use of steroids, narcotics, or muscle relaxants; 3) a known BTX allergy; 4) current pregnancy or lactation; or 5) the presence of infection or skin lesion at the injection site were excluded.

The patients included in this study underwent a single session of BTX injection in the temporalis and masseter muscles. Immediately before injection, BTX was prepared by dissolving 500 IU of BTX (Dysport; Ipsen, Paris, France) in 2 mL of room-temperature sterile isotonic saline. A 1-mL syringe with a 26-gauge (13 mm in length) was used for injections. The patients were asked to clench their jaw to identify and properly inject into the muscle. The solution was injected after careful aspiration; if aspiration indicated intravascular administration, the needle was slightly repositioned and aspiration repeated until the result was negative. A 150-IU solution was administered at three standardized points of the masseter muscles, while a 100-IU solution was administered at two points in the prominent area of the temporalis muscles. The injections were performed in the region where muscle activity was most intense during palpation, along the long axis of the muscle, and at 1-cm intervals apart.

3. Evaluation of the patients

Values for the visual analogue scale (VAS) and range of jaw motion—including for maximum mouth opening (MMO), protrusion, and right and left laterotrusion—were observed preoperatively and postoperatively at one-, three-, and six-month follow-up visits.

The IBM SPSS Statistics for Windows (ver. 24.0; IBM, Armonk, NY, USA) was used for statistical analyses. A paired-samples t-test was adopted for the comparison of parameters with normal distribution and the Wilcoxon signed-test was used for the comparison of parameters without normal distribution. The analyses were conducted at a 95% confidence level. A -value of less than 0.05 was considered to be statistically significant. A multiple regression model was used to identify meaningful associations between the predictors and secondary outcomes.

Parafunctions such as bruxism may damage TMJ tissues due to the disproportionate and repetitive excessive load on the TMJ24,25. Bruxism can result in clinical symptoms such as headache and TMJ together with chewing muscle pain and hypertrophy26,27. In addition, bruxism is considered to be a risk factor for the development of TMD signs and symptoms28.

Experimental studies have shown increased interstitial pressure and the development of intramuscular edema due to bruxism. Muscle pain is an expected consequence of intramuscular edema29. In this study, all patients with SB experienced pain in the masticatory muscles when awakened and there were also signs of pain during muscle examinations.

TMD and myofascial pain treatments primarily involve conservative approaches and symptomatic therapies30 and the destructive effect of bruxism on anatomical structures should be limited27,31.

Recent studies have investigated the effects of BTX injections on TMD, bruxism, masseter hypertrophy, and myofascial pain26,27,32 -34. BTX facilitates muscle relaxation by temporarily blocking the release of Ca+2-mediated acetylcholine from the myoneural junction. When synaptic regeneration occurs, the neuromuscular transfer resumes and paralysis subsides35. This process of relief with BTX therapy enables the patient to resolve the cause of the complaint36.

In our study, we observed a significant improvement in jaw movements at the first, third, and sixth months after BTX injection, together with a decrease in the pain level. It is known that local paralysis occurring in the muscle after BTX injection reoccurs after two to four months40. Although the physiological efficacy of BTX decreased, the reason behind why symptoms continued to decline may be due to patients being more aware of parafunctional habits and working toward having more controlled functional habits, while may have allowed other muscles involved in the chewing function to function normally.

There are studies that have examined different doses and injection techniques of BTX to eliminate the imbalance in the chewing muscles and reduce pain. Ernberg et al.40 performed injections after dissolving 100 IU of freeze-dried BTX (Botox; Allergan, Dublin, Ireland) into 1.0 mL of room-temperature sterile isotonic saline and applied 50 IU BTX to each muscle. Guarda-Nardini et al.39 injected 150 IU of BTX (Dysport) on each treated side with a five-point injection minimum, employing a reverse pyramid pattern in the masseter muscles and a chess-board pattern for the temporalis muscles. Kim et al.41 injected a total of 500 IU of BTX (Dysport) injections in the bilateral masseter and temporalis muscles at a 3:2 ratio. In our practice, similar to in the study of Kim et al.41, we used a total of 250 IU of BTX (Dysport) for injection into each side. Therefore, clarity regarding the optimal application dosage remains to be attained.

Ernberg et al.40 reported that a significant pain-reducing effect (30%) was found after BTX injections at the first month of follow-up. In the study by Guarda-Nardini et al.39 comparing BTX and saline solution injections, a 50% pain reduction at one month after BTX injections was reported, while Kurtoglu et al.42 observed a 22% pain reduction at one month of follow-up. In our study, the pain level was decreased by 59% in the first postoperative month, 72% in the third month, and 70% in the sixth month.

It has been reported that, after BTX injection, complications such as chewing difficulties, muscle pain, speech disorder, and abnormal changes in facial appearance can occur. Such complications are reported to be transient nature, lasting one to four weeks43. There is also a low probability of allergic skin reactions or immunological responses44, but we did not observe these outcomes in our patients.

Research cautions that there are no current standards for postevaluation and follow-up protocols relating to the administration of BTX injection45. In our study, it was observed that patients experienced a significant increase in mouth opening and decreased pain levels even in the postoperative sixth month. Therefore, it is important to monitor how long BTX activity is effective in treated patients. We suggest that pursuing regular follow-up examinations is essential to accurately determine the need for BTX re-treatment.

Bruxism is defined as repetitive jaw muscle activity characterized by the clenching or grinding of teeth and is known to cause TMD and myofascial pain. TMD treatment aims to eliminate the causative factor of this condition. Our study suggests BTX is effective in the symptomatic treatment for patients with temporomandibular myofascial pain and SB. However, studies involving larger groups and long period follow-ups should be conducted.

The study was approved by the Clinical Research Ethics Committee of Kocaeli University (KÜ GOKAEK 2019/148), and written informed consent was obtained from all patients. 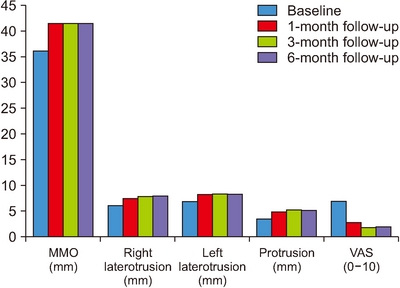