Ameloblastoma is a commonly observed benign tumor in the oral and maxillofacial region that is derived from dental epithelium 1 . In 2005, the World Health Organization (WHO) defined ameloblastoma as a benign, slow-growing, but locally-invasive and polymorphic neoplasm of dental epithelium proliferation 2,3 . If it is not completely removed, it tends to recur at a rate of 60% to 80% 2,4-7 . There is no report of sex predilection, and it occurs most commonly in the mandible 8 . In 1933, Carnoy’s solution was described as a sclerosing agent for treatment of cyst and fistula 6 , and it is still used as a fixative agent 9 . In 1987, Carnoy’s solution was applied in unicystic ameloblastoma (UAB) by Stoelinga and Bronkhorst and has been recently used to reduce the risk of recurrence after conservative treatment of UAB 10 .

Gao et al. 4 reported that marsupialization is an effective primary treatment for reducing the size of dental cysts and promoting bone generation. Decompression has been suggested when the lesion exceeds 3 cm2 in the panoramic view. In general, marsupialization reduces the size of cysts and minimizes disturbances, resulting in promotion of eruption of involved teeth; reducing issues with surrounding anatomical structures such as the inferior alveolar nerve and maxillary sinus; and preventing pathologic fracture during enucleation 1 .

In this present study, we report a common effective duration for marsupialization and discuss the treatment outcome after enucleation using Carnoy’s solution in two patients who had large (>3 cm2) radiolucent lesions with unerupted mandibular second and third molars.

An 18-year-old female presented to our hospital with a chief complaint of unerupted left lower second molar and induration of the left side of the floor of the mouth. Oral examination showed unerupted left mandibular second and third molars, and the left lingual side of the posterior mandible exhibited mild swelling, induration, and redness, but no discomfort or tenderness was reported. There was mobility of the left mandibular first molar but no pain. In panoramic view, the left mandibular second and third molars were impacted, and a large radiolucent lesion (approximately 4.2 cm×2.0 cm) was visualized around that area.(Fig. 1)

Marsupialization was performed on the buccal vestibule of the unerupted mandibular second molar.(Fig. 2) During the two-week follow-up period, neoplasm formation persisted, and ameloblastoma was diagnosed by incisional biopsy. Ten weeks after marsupialization, new bone formation was observed as increased radiopacity on the anterior and superior borders of the lesion in panoramic view.(Fig. 3) Fifteen weeks after marsupialization, woven bone density was increased in the margin of the lesion compared to the panoramic view at 10 weeks. However, since there was no significant change in the size of the cavity, enucleation was planned.

Twenty weeks after marsupialization, the intra-oral rubber drain was removed. At 21 weeks after marsupialization, cyst enucleation and extraction of the left mandibular first, second, and third molars were performed under general anesthesia. Distal root resorption in the left mandibular first molar was confirmed through radiographic imaging. Cyst enucleation was performed, consisting of the main mass of 4.5 cm×2 cm, a small mass of 2 cm×1.5 cm, and multiple inflammatory tissues.(Fig. 4) Carnoy’s solution (30 mL of 100% ethanol, 15 mL of 100% chloroform, and 5 mL of 100% acetic acid) was applied for approximately 3 minutes starting from the last entry site, followed by washing with normal saline. The surgical site was packed with furacin gauze without primary closure.

Plexiform ameloblastoma was diagnosed from permanent biopsy. The surgical site was continuously packed with furacin gauze. After seven weeks of cyst enucleation, an epithelized soft tissue cavity of 1 cm×2.5 cm was observed. No paresthesia on the left lower lip area and no recurrence of the lesion were observed during the follow-up period of eight months.(Fig. 5)

Through 12 weeks of marsupialization, no remarkable clinical findings were observed. However, after that time, relatively transparent yellowish fluid was observed, and antibiotics were administered for one week. Sixteen weeks after marsupialization, there was no significant change in bone formation on radiograph. Continual infectious yellowish fluid and poor oral hygiene around the tube were observed. The area contained a main mass of 4 cm×5.5 cm and a small mass of 2 cm×2.5 cm.(Fig. 8) After mass removal, Carnoy’s solution was applied to the cavity for 3 minutes beginning from the last entry site, followed by washing with normal saline. UAB was diagnosed by permanent biopsy.

Twenty-two weeks after enucleation, panoramic view showed increased radiopacity at the anterior, posterior, and inferior borders of the mass removal area. New bone formation was observed along the margin of the enucleation site in CT view. Upon clinical examination, secondary healing of the soft tissue was observed in the open dressing site with furacin gauze of 1.5 cm×1.5 cm. No paresthesia of the right lower lip area and no recurrence of the lesion were observed during the 10-month follow-up period.(Fig. 9)

Treatment modalities for ameloblastoma include segmental or marginal resection or more conservative treatment with enucleation and curettage. Marsupialization aims to reduce lesion size and is followed by secondary surgery 11,12 .

Marsupialization is a “cost-effective” technique for treatment of cysts. However, several disadvantages exist such as patient discomfort at the beginning of treatment and need for patient cooperation. Furthermore, in some cases, a second-stage surgery is required to remove the remaining pathological tissue. Long-term follow-up is required to observe the involved tooth 1 . Hou and Zhou 1 reported use of tube, gauze, or obturator to perform marsupialization or decompression. Regardless of the device used, the size of the cystic lesion decreased, vital tissue was conserved, and osteogenesis was promoted 1 .

For enucleation performed after marsupialization, information about adequate duration of marsupialization is rare 13-15 . Gao et al. 4 reported that marsupialization as a primary treatment was effective in shrinking the size of dental cyst and regenerating bone. Even though there was a difference in degree of shrinkage, a significant decrease in the size of the lesions was observed in radicular cyst (RC), odontogenic keratocyst (OKC), and UAB. The standard size of a lesion was defined as the estimate of maximal vertical length (cm) by maximal horizontal length (cm) in panoramic view as determined by two radiologists. Cyst enucleation was performed when cyst size was <3 cm2 in OKC and RC. However, marginal resection was indicated as a treatment protocol in UAB. In cysts >3 cm2, decompression was suggested with a minimum opening diameter of 0.8 cm. In addition, Gao et al. 4 suggested that the duration of decompression should be 2.75 months for RC, 8.32 months for OKC, and 9.14 months for UAB. However, the basis for these specific time periods was not provided 4 . Since both patients included in this study had radiolucent lesion >3 cm2 in panoramic view, marsupialization was the first option. The size of the lesions decreased during the 12 weeks after marsupialization but showed no further decrease after 16 weeks of follow-up.

In these two cases, the middle of the 16-Fr Foley catheter was cut to an appropriate size and used for marsupialization. The Foley catheter possesses a large hole (approximately 3 mm in diameter) for urine flow and a small hole (approximately 1 mm in diameter) for ballooning. With the syringe needle tip tightly engaged with the small hole, saline can be injected with strong pressure and drained through the large hole. This two-way system is thought to be relatively effective in irrigating polymorphic neoplasm without bottleneck in the lesion compared to a one-way drainage system such as a Penrose drain tube.

The main components of Carnoy’s solution are chloroform (3 mL), absolute alcohol (6 mL), glacial acetic acid (1 mL), and ferric chloride (1 g). With cotton applicators or ribbon gauze, it is applied to the lesion for 3 minutes while protecting the adjacent soft tissues 6,9 . Carnoy’s solution is a powerful fixative agent for remaining tumor cells within the cancellous space 11 . Frerich et al. 16 suggested that application of Carnoy’s solution should not exceed 3 minutes, and that direct application to the nerve could lead to nerve damage. Carnoy’s solution often is used as a complementary treatment for a lesion with a high recurrence rate. If there is nerve exposure in the cavity, solution should avoid the nerve as much as possible and be applied only once 10,17 .

According to a retrospective study of 29 patients by Lee et al. 10 , when Carnoy’s solution was applied for 3 minutes after cyst enucleation despite a diagnosis of UAB histologically exhibiting 93% mural invasion, a low 10% recurrence rate was reported. This suggests that Carnoy’s solution may be beneficial against recurrence.

Lau and Samman 18 stated that the recurrence rate may be lower than that reported above. If cystic residue remains after attempts to preserve teeth around the cyst, it may lead to recurrence 10,11,18 . Therefore, in the two cases in this report, all the teeth involved in the cystic lesions were extracted, and Carnoy’s solution was applied for 3-5 minutes.

In conclusion, in this study, two patients presented to the hospital with an unerupted mandibular second molar. Panoramic radiograph revealed a relatively large radiolucent lesion with two impacted teeth that was diagnosed as ameloblastoma on permanent biopsy. We performed marsupialization as a primary treatment considering the size of the lesion and the age of the patients.

(1) The clinical duration of marsupialization in radiologic size reduction of ameloblastoma involving two impacted teeth was approximated at 12 to 16 weeks. In both patients, there was no reduction in size beyond 16 weeks, and long-term marsupialization was attributed to poor oral hygiene. Using data from only two patients is not sufficient for establishing a standard treatment protocol, and further studies are necessary.

(2) Carnoy’s solution was applied in the two patients for approximately 3-5 minutes after enucleation, starting from the last entry site, followed by washing with normal saline. No side effects or recurrence of the lesions was observed during the one-year follow-up.

(3) A number of different materials has been used for marsupialization. In this study, proper length Foley tube was used. This material is not as strong as a metal but possesses more rigidity than gauze or a Penrose tube. The Foley tube has a small hole for the syringe tip to irrigate with strong pressure and a large hole to discharge the neoplasm inside the cavity. This two-way system is effective in irrigating polymorphic neoplasms without bottleneck in the lesion compared to the one-way drainage system.

S.M.L. collected the data and wrote the manuscript. J.K.K., D.H.L., and J.A.B. participated in the study design of the research. S.O.K. was involved with the overall conduction of the study. All author read the final manuscript and approved it. 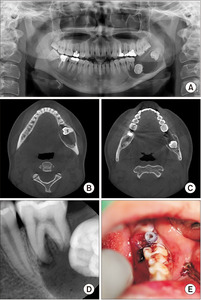 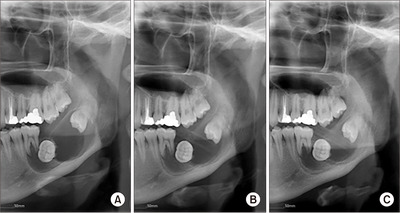 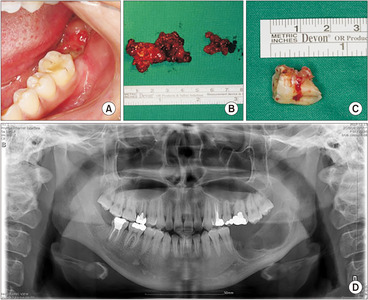 Fig. 5. A. Open dressing with furacin gauze was changed twice a week. B. Seven weeks after enucleation. 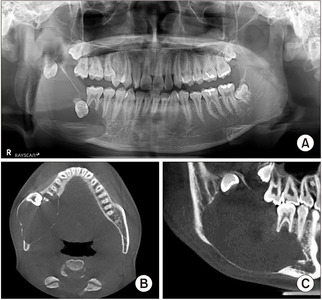 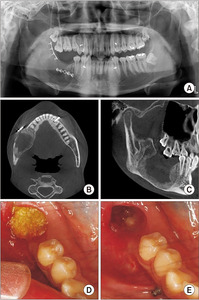