A 50-year-old male patient was admitted to the traumatic intensive care unit after a traffic accident. He had multiple facial, right side rib, and foot traumas and was referred to the department of oral and maxillofacial surgery for treatment of panfacial injuries. During the clinical examination, severe facial and neck edema was observed, and the patient’s jaw movement was restricted. Due to severe neck swelling, endotracheal intubation was performed. Both mandibular segments were separated in the symphysis area and easily mobile. The right mandibular segment was deviated to the right side, and a bony protuberance was palpated on the right preauricular region. The anterior teeth of the maxilla were severely dislocated, and severe malocclusion and crossbite were observed on the right side of the mandible.

Computed tomography (CT) revealed no definite intracranial lesion or abnormal parenchymal density in the brain or extra-axial fluid collection in the cranium. There were multiple rib fractures on the right side, with a small amount of pneumothorax. In the maxillofacial region, the patient exhibited a Le Fort II fracture including multiple fractures at the bilateral anterior, posterior, and lateral walls of the maxillary sinus, nasofrontal junction, pterygomaxillary junction, alveolar process of the maxilla, hard palate, nasal septum, and mandibular body.(Fig. 1) The fracture was located on the mandibular symphysis with the alveolar process and severe displacement of the right segment of the mandible. The right TMJ was dislocated to the superolateral side, entered the temporal fossa, and was above the zygomatic arch with a fracture of the medial pole of the condyle head.(Fig. 1)

Open reduction of the mandibular symphysis and closed reduction of the right TMJ were planned under general anesthesia. Four days after the injury, surgery was performed in conjunction with orthopedics to repair the multiple metatarsal fractures in the right foot. The dislocated anterior teeth were removed, and intermaxillary fixation was secured with proper occlusion. The superolaterally dislocated right TMJ was manually reduced. After the mandible and TMJ were reduced, mini-plates were adapted onto the mandibular symphysis, and the operation was completed uneventfully. However, relapse and re-dislocation of the right TMJ occurred immediately after surgery. In postoperative CT, the deviation of the mandibular segment was slightly reduced. However, a severe bony gap remained on the lingual cortex of the symphysis, and the right TMJ remained dislocated from the glenoid fossa and was on the zygomatic arch.(Fig. 1) Due to the traumatic injury, the medial pole of the condyle head was fractured, and the TMJ was dislocated to the superolateral side. The capsular ligament and lateral pterygoid muscle might have been disrupted, with dislocation of the TMJ affecting the instability and immediate relapse after surgery. The function of the temporalis attached to the coronoid process could also have caused the immediate relapse of the TMJ due to the direction of muscle function. For proper reduction of the mandible, stable reduction of the right TMJ and rigid fixation on the mandibular symphysis were required. Coronoidectomy was planned to prevent temporalis muscle function on the TMJ reduction.

We planned a second surgery for reduction of the mandibular symphysis and right TMJ. Before TMJ reduction, coronoidectomy was performed to reduce the TMJ penetration into the glenoid fossa through an intraoral approach. The dislocated TMJ was easily reduced in the mandibular fossa through a preauricular approach, and proper occlusion was established. After intermaxillary fixation, a reconstruction plate was adapted onto the mandibular symphysis for rigid fixation. A layered suture was applied to the right preauricular area. The surgery was successfully completed, and the dislocated condyle was reduced on the glenoid fossa. However, a slight lateral dislocation of the condyle remained.(Fig. 2) Intermaxillary fixation was performed two weeks after surgery. One month after the second operation, the patient was discharged with mouth opening at 10 mm. One year after surgery, the patient’s mouth opening was increased to 35 mm, and prosthodontic treatment was performed. His postoperative jaw movement and tooth occlusion were satisfactory.(Fig. 2)

A 52-year-old male patient was brought by ambulance to the emergency department after his motorcycle collided with a large truck. A subdural hemorrhage and multiple skull fractures were observed. The patient was admitted to the traumatic intensive care unit and referred to oral and maxillofacial surgery for treatment of multiple facial fractures. The patient had a Le Fort II facial fracture with multi-segmental fractures on the maxilla, nasal bones, nasal septum, and mandible. The maxillary anterior teeth were dislocated, and the mandibular body was segmented from the right parasymphysis and left mandibular body. The left TMJ was dislocated to the superolateral side above the zygomatic arch, and the medial pole of the condyle head was fractured.(Fig. 3) Severe facial and neck swelling was observed. Therefore, before surgery, a tracheostomy was performed under general anesthesia due to the difficulty of nasal intubation.

Two weeks after the injury, reduction and fixation of the maxilla, nasal bone, mandibular body, and left TMJ were performed under general anesthesia. The left preauricular and submandibular approach was used to reduce the mandible and condyle. The left condyle segment was dislocated above the zygomatic arch and was not easily reduced possibly due to the fracture of the medial pole of the condyle head, complete fracture and dislocation of the left mandibular body, and the direction of temporalis muscle function. Before the reduction of the left TMJ, a coronoidectomy was performed through the intraoral approach. The dislocated condyle was easily reduced, and the fractured condyle head segment was fixed with lag screws.(Fig. 3) A vestibular incision was created from the right upper molar to the left upper molar for maxilla reduction. The dissection exposed the lateral wall of the maxilla and the inferolateral aspect of the nasal cavity. Subperiosteal dissection was performed posteriorly to the pterygomaxillary junction. The posteriorly impacted maxilla was reduced by the Rowe force and fixed with miniplates on both sides. After reduction of the maxilla, intermaxillary fixation was secured with an arch bar and screws. The fractures of the mandibular symphysis and body were fixed with mini-plates and reconstruction plates.(Fig. 3) Preauricular, submandibular, and intraoral incisions were sutured layer by layer. The procedures were completed without complications. Intermaxillary fixation was conducted two weeks after surgery. One month after surgery, the patient’s mouth opening was limited to 25 mm, and he was transferred to another hospital for rehabilitation. After discharge from our hospital, despite periodic contact, the patient could not be followed-up. This study was approved by the Ethical Committee of Chungbuk National University Hospital (No. 2019-01-001).

The treatment goal of superolateral condyle dislocation is reduction of the displaced condyle in the original glenoid fossa position and recovery of the TMJ’s normal physiological function10,12,13. Condyle reduction is managed by closed or open reduction. Closed reduction is the first treatment of choice because it is a simple procedure without additional incisions required for the open approach12. Closed reduction can be performed with several instruments and methods using a bone traction hook placed on the sigmoid notch, arch bar traction, and traction wires passing through the mandibular angle area1,14. Open reduction is performed through a preauricular approach15. Our first case was manually reduced during the initial operation. The displaced condyle was passively reduced but easily dislocated from the fossa postoperatively.(Fig. 1) This might have been due to disruption of the capsular ligament and lateral pterygoid muscle during TMJ dislocation, resulting in instability and immediate postsurgical TMJ relapse16. The function of the temporalis attached to the coronoid process might also have caused immediate relapse of the TMJ due to the direction of muscle function5.

Superolateral dislocation of the condyle has been successfully treated by closed or open reduction15. Condyle dislocation commonly occurs with fractures of the ipsilateral condyle head or symphysis and body area with minimal displacement17. However, in our cases, the symphysis and body area were completely separated, and the condyle segment was displaced above the zygomatic arch. The medial pole of the condyle head was fractured, complicating manual reduction15. As a result, the condyle was easily displaced after surgery. A number of teeth was extracted and fractured, leading to difficulty in establishing proper occlusion after reduction. Due to these complications, condyle relapse immediately occurred, requiring a more stable reduction of the condyle and rigid fixation of the mandibular segment. We achieved rigid fixation of the mandibular segment using a reconstruction plate after condyle reduction. The condyle head segment was fixed with lag screws in the second patient.(Fig. 3) To eliminate interference of the temporalis muscle in condyle reduction, we performed coronoidectomy before reduction.

In the second case, the left condyle was superolaterally displaced with an ipsilateral mandibular angle fracture. The condyle segment was completely separated from the distal segment, and it was difficult to establish proper occlusion due to the absence of teeth in the condyle segment area and instability of the maxillary teeth caused by the Le Fort II fracture. Due to these complications, accurate reduction of the condyle segment was difficult. Coronoidectomy was performed first; after reduction of the condyle, rigid fixation on the mandibular angle and condyle head fixation were completed. The condyle was stably reduced and the surgery was successful. However, extensive physiotherapy could not be conducted due to the patient’s brain damage. Although his mouth opening was limited one month after surgery, it was acceptable for feeding. Unfortunately, follow-ups could not be conducted after the patient was transferred to a rehabilitation facility.

There were several difficulties in condyle reduction without coronoidectomy. First, there were severe fractures and complete separation in the mandibular symphysis and body area with condyle dislocation. Therefore, the condyle segment of the mandible was unstable and easily moved to the preoperative position. Second, the medial pole of the condyle head was fractured in both cases, allowing for easy dislocation of the condyle from the glenoid fossa after reduction. Third, multiple teeth were fractured and lost, and the maxilla was displaced due to the Le Fort II fracture. Therefore, proper occlusion and stable intermaxillary fixation could not be obtained. More stable condyle reduction and rigid fixation of the mandibular segment were required in our cases. We performed coronoidectomy to reduce the superiorly dislocated condyle, and the mandibular segments were fixed rigidly using reconstruction plates. The condyle head segment was fixed with lag screws in the second patient to prevent dislocation from the mandibular fossa.(Fig. 3)

This study was approved by the Ethical Committee of Chungbuk National University Hospital (No. 2019-01-001). 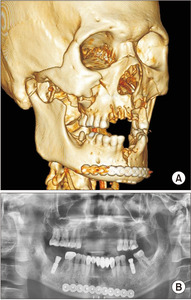 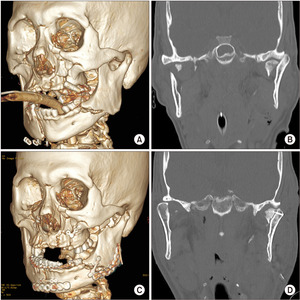