The tympanic bone, one of the four parts of the temporal bone, forms the bony part of the external auditory canal (EAC). Myringoplasty, tympanoplasty, and mastoidectomy are performed in the treatment of middle ear pathologies. The most common indications of tympanoplasty are tympanic membrane perforation due to chronic middle ear infection, cholesteatoma, ossicular chain pathology, and middle ear tumors. In tympanoplasty, the tympanomeatal flap is elevated. The canal skin and tympanic membrane are lifted together, allowing visualization of the entire middle ear cavity1. During surgery, when the middle ear pathology or the tympanic membrane cannot be fully accessed, the bone can be removed from the anterior wall. Canalplasty, in which bone resection is performed from the anterior wall of the EAC, is a surgical procedure used to establish or expand the EAC opening. Other conditions that might require canalplasty include stenosis, exostosis, and narrow canal pathologies due to chronic external ear inflammation2. In the literature, temporomandibular joint (TMJ) herniation into the external acoustic canal secondary to a bony defect in the anterior wall has been reported after radical mastoidectomy, canalplasty, tympanomastoidectomy, and tympanoplasty procedures3. Kim4 reported a case of osteomyelitis of the TMJ after a wall-down mastoidectomy.

The aim of the current study was to determine the tympanic bone thicknesses (anterior-superior [AS], anterior-inferior [AI], and inferior wall), the external ear canal length, and the distance between the EAC and the TMJ (the tympanomandibular distance) using temporal bone computed tomography (CT), as well as to present the findings to guide preoperative preparation.

In this study, 663 ears of 349 patients (179 females and 170 males) who underwent high-resolution temporal bone CT imaging for various reasons between January 1, 2017, and December 31, 2019 at our institution, were retrospectively evaluated. The sex and age of the patients included in the study were noted. Patients under 18 years of age, those with an anomaly or pathology involving the EAC, and those who underwent surgery that could disrupt the integrity of the EAC were excluded from the study. To ensure standardization in radiological images and tympanomandibular distance measurements, images of patients with an open mouth were excluded from the study.

High-resolution temporal bone CT imaging was undertaken using a 16-slice multidetector CT scanner (Aquilion; Toshiba Medical Systems, Otawara, Japan). Scanning parameters were 120 kVp, 130 mAs, 220 field of view, and 1 mm section thickness. The scan was obtained parallel to the hard palate. The CT images were analyzed using the radiology workstation with a digital display at a resolution of 2,048×2,560. Each measurement was performed twice, and the two results were averaged. The measurements of 30 cases were performed randomly at one-week intervals by a person who was blinded to all case information, and the intra-observer agreement was investigated by analyzing the differences between the two measurements.

The screen of the workstation was divided into three windows to visualize axial, oblique coronal, and oblique sagittal sections simultaneously. The narrowest part of the canal, which is the key area in canal expansion procedures, was determined.(Fig. 1) In the sagittal plane of this area, the canal was divided into two portions according to the equatorial plane. The AI and AS wall thicknesses were measured parallel to the equator (in canalplasty, the first incision was made at 45°), and the inferior wall thickness was assessed perpendicular to the equator.(Fig. 2) The distances from the inner cortex to the outer cortex were measured at the thinnest part of the wall.(Fig. 3) The narrowest tympanomandibular distance between the posterior cortex of the mandibular condyle and the anterior cortex of the tympanic bone was measured in the same plane, parallel to the equator. The length of the EAC bone was assessed using the coronal oblique image. The shape of the EAC was evaluated in the coronal and sagittal planes. A radiologist with 10 years’ experience reviewed all the images. This study was approved by the Ethics Committee of the Kütahya Health Sciences University (approval No. 2020/15-19), and the informed consent was waived by the Ethics Committee.

All data were analyzed with using the IBM SPSS Statistics for Windows (ver. 20.0; IBM, Armonk, NY, USA), and <0.05 was accepted as the statistical significance limit. The mean, standard deviation, median, minimum, and maximum values were obtained as descriptive statistics for continuous data, and the numbers and percentages were compiled for discrete data. The independent-samples -test was used to examine the differences in tympanic bone measurements by sex, and the paired-samples -test was conducted to compare the right and left measurements. The Pearson correlation coefficient was calculated to examine the relationships between continuous data. The correlation was interpreted as non-significant if the R coefficient was 0.1-0.19, weak if 0.20-0.29, moderate if 0.30-0.39, strong if 0.40-0.69, and very strong if ≥0.70. Intra-observer agreement was examined using the intraclass correlation coefficient.

The images of 349 patients were evaluated in this study. The mean age of the patients was 49.45±13.95 years (range, 19-80 years). General tympanic bone measurements are shown in Table 1. The AS wall was determined to be the thinnest, followed by the AI wall, while the inferior wall was the thickest.(Table 1) The mean values of the right-left side measurements are presented in Table 2. A significant difference was found between the right and left AS and AI wall thicknesses and the canal lengths of the cases.(Table 2)

In all measurements, the bone thickness and canal lengths in males were higher than those of females, and there were significant differences in bilateral AS, AI, and inferior wall thicknesses; bilateral canal lengths; and left tympanomandibular distance. However, no significant difference was found in the mean values of the right tympanomandibular distance according to sex (>0.05).(Table 3) The intra-observer agreement was significant for all measurements (<0.001).(Table 3)

In the sagittal plane, close to the tympanic membrane, we detected three shapes: oval, triangular, and round.(Fig. 5) The most common shape detected in the sagittal reformatted image on both sides was oval (n=493, 74.4%), followed by triangular (n=108, 16.3%) and round (n=62, 9.4%) in the third frequency. There was no statistically significant difference between the coronal shape and the sagittal shape on either side (>0.05).

The tympanic bone plays an important role in the treatment of external and middle auditory canal disorders, providing access to the tympanic membrane and helping produce a well-formed mastoid cavity. Removal of the tympanic bone is a critical step in the lateral skull base and infratemporal fossa approach, especially in surgical procedures requiring facial nerve rerouting. The inferior and anterior walls are the starting points of canalplasty8.

In the present study, the anterior wall measurements were obtained from the narrowest part of the canal, which is the target point of the aforementioned operations. The AS and AI walls of the tympanic bone were determined to be thinner, and the inferior wall was approximately 1 mm thicker than that reported by Rodrigues et al.8. Although the measurement method and the place of measurement were the same, the differences between the two studies might be related to the racial characteristics of the samples and the use of different technologies to obtain the measurements. In addition, while Rodrigues et al.8 reported that the anterior wall thickness varied between 1 and 5 mm, we measured it to be within the range of 0.77-5.80 mm.

Eckerdal and Ahlqvist9 evaluated the temporal bone CT images of 53 cadavers; unlike the current study, they performed anterior wall measurements on a single level from the medial (i.e., the thinnest part) area. Eckerdal and Ahlqvist9 reported results in the range of 0.21-4.10 mm. In the current study, the AS wall thickness ranged from 0.77-4.49 mm, and the AI wall thickness ranged from 0.92-5.80 mm. The reason for this difference might be that the measurements were performed on different parts and different tissues (living vs cadaver tissue).

The values we obtained from all the measurements were higher in males than in females. Among these values, only the right tympanomandibular distance did not significantly differ according to sex, while all the remaining values showed significant differences. Eckerdal and Ahlqvist9 also observed differences in the tympanic bone measurements of both sexes, but this difference did not reach statistical significance. This finding can be explained by the smaller number of participants in the previous study and advances in technology that have emerged since it was conducted.

The tympanic bone canal length measured in the current study differed from previous reports by Rodrigues et al.8 and Eckerdal and Ahlqvist9. The non-significant weak correlation that existed between canal length and wall thickness might be due to the differences between the sexes.

Eckerdal and Ahlqvist9 also investigated the relationship between the tympanic bone and the mandibular head; however, they did not measure the tympanomandibular distance7. In our study, the tympanomandibular distance was measured as 2.79±0.99 mm (range, 0.58-6.71 mm). During canalplasty or saucerization of a stenotic EAC, the TMJ can be damaged during bone resection from the anterior wall. Small bony defects are typically seen and allow herniation of the periarticular soft tissues. Although rare, the bony defect can be large, or the TMJ capsule can herniate into the EAC. Reconstruction of the anterior canal wall with a cartilaginous graft is recommended to avoid possible masticatory problems and risk of infective arthritis10. Therefore, it is important to determine the tympanomandibular distance as well as the tympanic bone thickness prior to surgery.

One of the limitations of this study was that we were only able to compare our results to a limited number of publications because there is minimal research concerning the tympanic bone. Another limitation was that all the measurements were performed by a single person. To partially compensate for this limitation, the intra-observer agreement was investigated, and a high level of agreement was determined. However, due to the absence of a second observer, inter-observer agreement could not be established. Last, the sample consisted of only Turkish participants; therefore, possible racial differences could not be investigated. Similar studies should be conducted at different centers to better reveal racial differences in tympanic bone anatomy.

Anterior wall and tympanomandibular distance measurements should be obtained using preoperative temporal bone CT imaging to ensure safe performance of resection from the anterior side of the tympanic bone (which is required in some otological procedures) and to prevent possible TMJ damage. The results of the current study can be useful for comparisons in preoperative evaluations.

Ş.A. collected data and wrote the manuscript. M.F.T. participated study design and helped to draft manuscript. All authors read and approved the final. 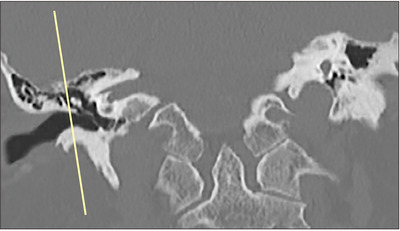 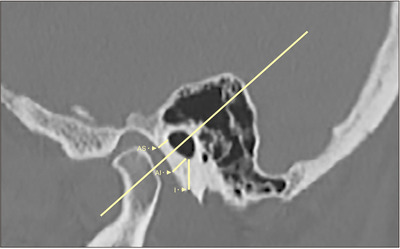 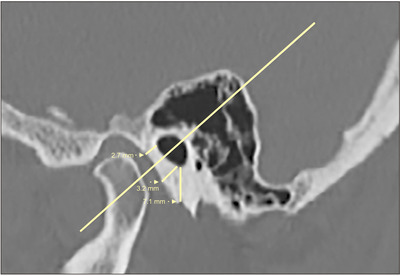 Fig. 3. Sagittal oblique bone window computed tomography image. Measurements were made from the inner cortex to the outer cortex. 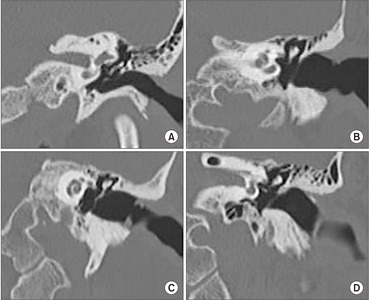 Fig. 5. Three main shapes were observed in the sagittal plane: oval (A), round (B), and triangular (C).